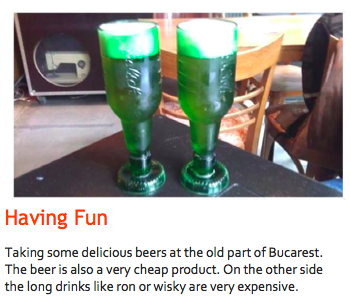 I live in a small town of about 80 thousand people, called Pontevedra. Can you imagine my astonishment when I see the first time the traffic of the city. “That’s crazy,” I thought, “people drive like crazy”. The pace of life is very different from what I was used to, but I was not afraid, on the contrary, I was anxious to leave my luggage and take my first walk around the capital.

Bucharest is more European than Madrid. This is something that is noticeable from the first moment you walk through Universitate. The atmosphere, the way people dress, more stylish, more “modern”.

I’ve also had the chance to see a film at the cinema in the original. In Spain are translated to Spanish speech, so I had never been able to hear the voice of, for example, George Clooney on the big screen. It seems stupid, but the fact of finding movies with subtitles is an advantage in every aspect. All Romanians will get used to hearing a foreign language and, therefore, have a greater capacity for understanding. Chatting with a friend told me: “We grew up watching on TV Cartoon Network in English.” And that’s no all, many women told me they know Spanish, because they see “soap operas” (telenovelas) . “What is this madness?” I thought, “I could never learn a language so easily.”

I was struck by the passion for art among young people. I found real film addicts and it’s something that I love. I soaked films, directors and actors Romanians. I discovered several authors have positioned between my favorites, as Cristian Mungiu.

Researching with my friends, they told me that the Romanian government focuses its efforts on maintaining Bucharest very “clean”, but the rest of the country does not reflect this. I didn’t had the chance to get out of Bucharest, but I want to see every corner of Romania. See that other side of which everyone speaks. What I have felt in people is a great strength and desire to succeed. It’s hard to have that attitude when things are bad, but I see the youth mentally prepared to change for something better. The current did not work, so let’s find a new way of seeing things. That’s something they have achieved through their efforts and is admirable.

One of the things that surprised me most about youth is that many people of my age were already married. They even had a son. I don’t know if it’s because of religious belief or historical tradition , but it was a shock. “I can not imagine married with 22 years “, I thought instantly.

To Rumania? But there are only gypsies to steal you in Rumania, bad people. That was the first response I received at my faculty when I mentioned it to my friends I was going to Romania. It’s amazing how much can defer people’s opinions of reality when it is not known.

On the bus ride from Otopeni airport to the center of Bucharest and I could clearly see a thing, Romania has to have stunning scenery, natural area is immense. Another thing that caught my attention was to see so much industry and commerce of the world leading brands such as Microsoft, Ubisoft and even Ferrari.

Spain we like it or not, are closely related to Romanian and here they like us, not like in other countries, such as London, where the population is often very cold and very unfriendly to foreigners. Romania loves us and we respond by calling them criminals or gypsies.

The College infrastructure is impressive. Former Communist era buildings now converted into classrooms and schools. Large statues in the halls of schools, buildings with large windows and huge dimensions. The walls breathe history, far from the “new” air and smelling varnish classrooms I am currently studying in Spain.

Many of the teachers not only teach classes but also working in the media, they may have two jobs for economic issues but the important thing is that people are used to work for Media Communication in different sectors. In Spain as a general rule, for example at my school, the teachers are just teachers and perhaps some of them have had an important career before teaching at the university, but as a general rule and unfortunately they are not media professionals.

I feel that Bucharest is my second home, I feel that his population radiates energy, momentum and desire to grow in all aspects, I see very prepared and very healthy ambition people. I see a united people with common objectives fighting against the injustices of the government and to save nature, like the gold mountain that the Rumanian government sold to a Canadian company to exploit it.

The feeling is I really love Bucharest. And maybe it would be a choice to live in the future. I have very good friends which I’m going to miss a lot. I’m going to defend the Rumanian people in everyplace I will go. It’s a shame I have to come back Spain to finish my final career project, otherwise I will stay here for long time. Maybe I come back soon, as I said I’m feeling like at home here, and this is something difficult to find in your normal life.

“One of the things that surprised me most about youth is that many people of my age were already married. They even had a son. I don’t know if it’s because of religious belief or historical tradition , but it was a shock. “I can not imagine married with 22 years “, I thought instantly.” – Asta apropo de anomie si de “criza post-facultate”. E o discutie frumoasa aici, discutie la care cred ca studentii straini ar putea contribui cu succes.

When I told everybody I know I was coming to Bucharest for 8 months many people asked me what cities I had chosen in my list before this one, and they didn´t understand Bucharest was actually my first option in the list. This is because all the things many spanish people don’t know about Romania. And if this keep them not curious to come and visit the city, imagine to think about living here some months! I didn’t know anything about Bucharest neither, but where is the emotion on going to famous western cities that we usually visit? I thought… Read more »