As a Translation Assistant for Creative Commons, I have the chance to talk every day to different people, coming from different cultures. Although arguments over translations of the 4.0 licenses are sometimes very powerful (you could never imagine how a comma or a 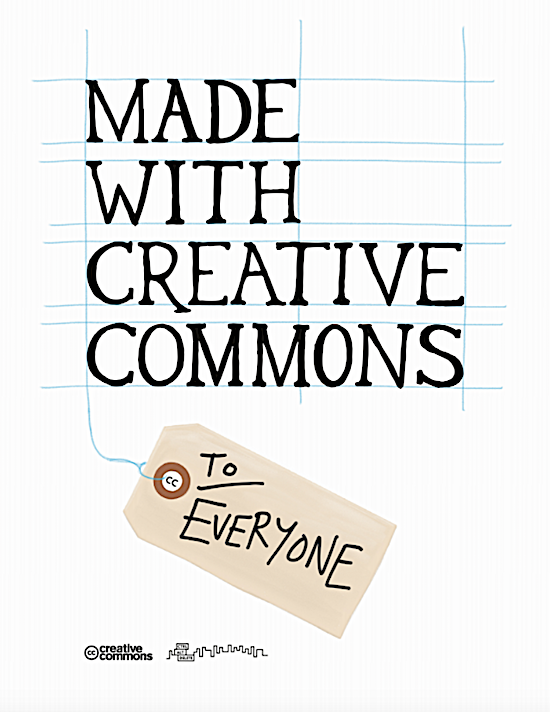 capitalised word can sparkle vivid discussions!), these people have something in common: a passion for sharing.

But can you make money with Creative Commons-licensed works? Although the question is complex, the short and brutal answer is NO, the licenses themselves are not the engine of profit. But this is not the point of CC-licensed works. Paul Stacey and Sarah Hinchliff Pearson started on a journey to search for business models of artists and creators who embraced CC licenses. Instead of a business manual, the book “Made with Creative Commons” is philosophy in a nutshell: it’s about how the sharing economy is starting to change the world little by little, how we go back to the commons and it’s also about a new relationship between humans, where we are all creators and consumers in the same time.

The book “Made with Creative Commons” is a mix of documentation, research and interviews. Paul Stacey and Sarah Hinchliff Pearson begin by going back in history and explaining to us where the commons started and what are the digital commons. A short history of Creative Commons follows, with an emphasis on the benefits of the CC licenses. For those unfamiliar with the licenses, there are some technical explanations. Then the book turns into a user manual, with a chapter dedicated to the different revenue streams available to creators who license their work with CC. The final and most colourful part are the case studies.

The book itself is an example of a successful project: funded on Kickstarter, the book was published in all digital formats and is distributed for free, but the physical copy is available at a small price on Amazon.

The authors came to the conclusion that people who prefer CC licenses over traditional copyright models are individuals and organisations who think beyond profit:

Those we interviewed were not typical businesses selling to consumers and seeking to maximize profits and the bottom line. Instead, they were sharing to make the world a better place, creating relationships and community around the works being shared, and generating revenue not for unlimited growth but to sustain the operation.

Sharing work with Creative Commons is, at its core, a moral decision. The commercial and other self-interested benefits are secondary. Most decided to use CC licenses first and found a revenue model later. This was our first hint that writing a book solely about the impact of sharing on business might be a little off track.

And why should you choose to offer your work freely to your peers?

Putting a Creative Commons license on your content won’t make it automatically go viral, but eliminating legal barriers to copying the work certainly can’t hurt the chances that your work will be shared. The CC license symbolizes that sharing is welcome. It can act as a little tap on the shoulder to those who come across the work—a nudge to copy the work if they have any inkling of doing so. All things being equal, if one piece of content has a sign that says Share and the other says Don’t Share (which is what “©” means), which do you think people are more likely to share?

This is a model that existed in other forms since the ’80s:

In the early days of computing, programmers and developers learned from each other by sharing software. In the 1980s, the free-software movement codified this practice of sharing into a set of principles and freedoms:

Creative Commons took this philosophy to a new level:

In 2001, Creative Commons was created as a nonprofit to support all those who wanted to share digital content. A suite of Creative Commons licenses was modeled on those of open-source software but for use with digital content rather than software code. The licenses give everyone from individual creators to large companies and institutions a simple, standardized way to grant copyright permissions to their creative work.

What are the Creative Commons licenses?

You create something, be it a photo, a music piece or a text. You want people to access it immediately, but, more than that, you want them to use it in the classroom, in public performances and even build upon it, remix and redistribute it. So, you share your content with a Creative Commons license. You choose copy-left instead of copyright. There are 6 different CC licenses, learn more about them here.

Use CC to share, promote yourself and (why not) make some money

From the book “Made with Creative Commons”, here are some ways to use the CC licenses:

Most who are Made with Creative Commons use a variety of methods to bring in revenue, some market-based and some not.

Read this book written and documented by Paul Stacey and Sarah Hinchliff Pearson, to learn more about each method and model. For your inspiration, here is the list of the case studies – the result of the interviews led by the authors.

Arduino is a for-profit open-source electronics platform and computer hardware and software company. Founded in 2005 in Italy.

Revenue model: charging for physical copies (sales of boards, modules, shields, and kits), licensing a trademark (fees paid by those who want to sell Arduino products using their name).

Ártica provides online courses and consulting services focused on how to use digital technology to share knowledge and enable collaboration in arts and culture. Founded in 2011 in Uruguay.

The Blender Institute is an animation studio that creates 3-D films using Blender software. Founded in 2006 in the Netherlands.

Cards Against Humanity is a private, for-profit company that makes a popular party game by the same name. Founded in 2011 in the U.S.

The Conversation is an independent source of news, sourced from the academic and research community and delivered direct to the public over the Internet. Founded in 2011 in Australia.

Cory Doctorow is a science fiction writer, activist, blogger, and journalist. Based in the U.S.

Figshare is a for-profit company offering an online repository where researchers can preserve and share the output of their research, including figures, data sets, images, and videos. Founded in 2011 in the UK.

Figure.NZ is a nonprofit charity that makes an online data platform designed to make data reusable and easy to understand. Founded in 2012 in New Zealand.

Knowledge Unlatched is a not-for-profit community interest company that brings libraries together to pool funds to publish open-access books. Founded in 2012 in the UK.

Lumen Learning is a for-profit company helping educational institutions use open educational resources (OER). Founded in 2013 in the U.S.

Jonathan Mann is a singer and songwriter who is most well known as the “Song A Day” guy. Based in the U.S.

The Noun Project is a for-profit company offering an online platform to display visual icons from a global network of designers. Founded in 2010 in the U.S.

The Open Data Institute is an independent nonprofit that connects, equips, and inspires people around the world to innovate with data. Founded in 2012 in the UK.

Opendesk is a for-profit company offering an online platform that connects furniture designers around the world with customers and local makers who bring the designs to life. Founded in 2014 in the UK.

OpenStax is a nonprofit that provides free, openly licensed textbooks for high-enrollment introductory college courses and Advanced Placement courses. Founded in 2012 in the U.S.

Amanda Palmer is a musician, artist, and writer. Based in the U.S.

PLOS (Public Library of Science) is a nonprofit that publishes a library of academic journals and other scientific literature. Founded in 2000 in the U.S.

Revenue model: charging content creators an author processing charge to be featured in the journal.

The Rijksmuseum is a Dutch national museum dedicated to art and history. Founded in 1800 in the Netherlands.

Shareable is an online magazine about sharing. Founded in 2009 in the U.S.

Siyavula is a for-profit educational-technology company that creates textbooks and integrated learning experiences. Founded in 2012 in South Africa.

SparkFun is an online electronics retailer specializing in open hardware. Founded in 2003 in the U.S.

TeachAIDS is a nonprofit that creates educational materials designed to teach people around the world about HIV and AIDS. Founded in 2005 in the U.S.

Tribe of Noise is a for-profit online music platform serving the film, TV, video, gaming, and in-store-media industries. Founded in 2008 in the Netherlands.

The Wikimedia Foundation is the nonprofit organization that hosts Wikipedia and its sister projects. Founded in 2003 in the U.S.